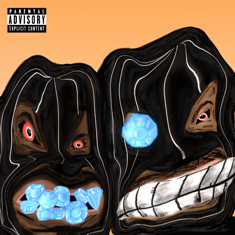 Abe Linx & Tully C’s debut album, Runaway Diamonds, comes with great anticipation & an All-Star cast to match. Keeping tradition, producer Baleboy Geechie helps bring out the teams’ lyrics over grandiose samples & thunderous 808 accompaniment. Paying homage to different diamond heists around the world, the duo takes you on a journey to more success, & an escape from an environment in which has never been given much.

It makes sense coming from Indianapolis, & the duo making the connection with Benny The Butcher. All three come from places where music, (especially rap music) are unlikely career paths having not many examples before them to lead the way. Same goes for all the features in this case. Jay Worthy, being from Vancouver, Willie the Kid in Grand Rapids, & Hus Kingpin from Hempstead, NY.

After releasing the Benny The Butcher assisted single and album title track last week, Abe & Tully are back with “100 Carats” featuring Jay Worthy.

Runaway is the escape and the chance to make it out. Diamonds is the loot and the uncanny finding of “hidden gems” in two well-deserved emcees from Indianapolis, now heard around the world.

You can now purchase and stream “100 Carats” at your preferred DSP: https://distrokid.com/hyperfollow/abelinxtullyc/100-carats-feat-jay-worthy