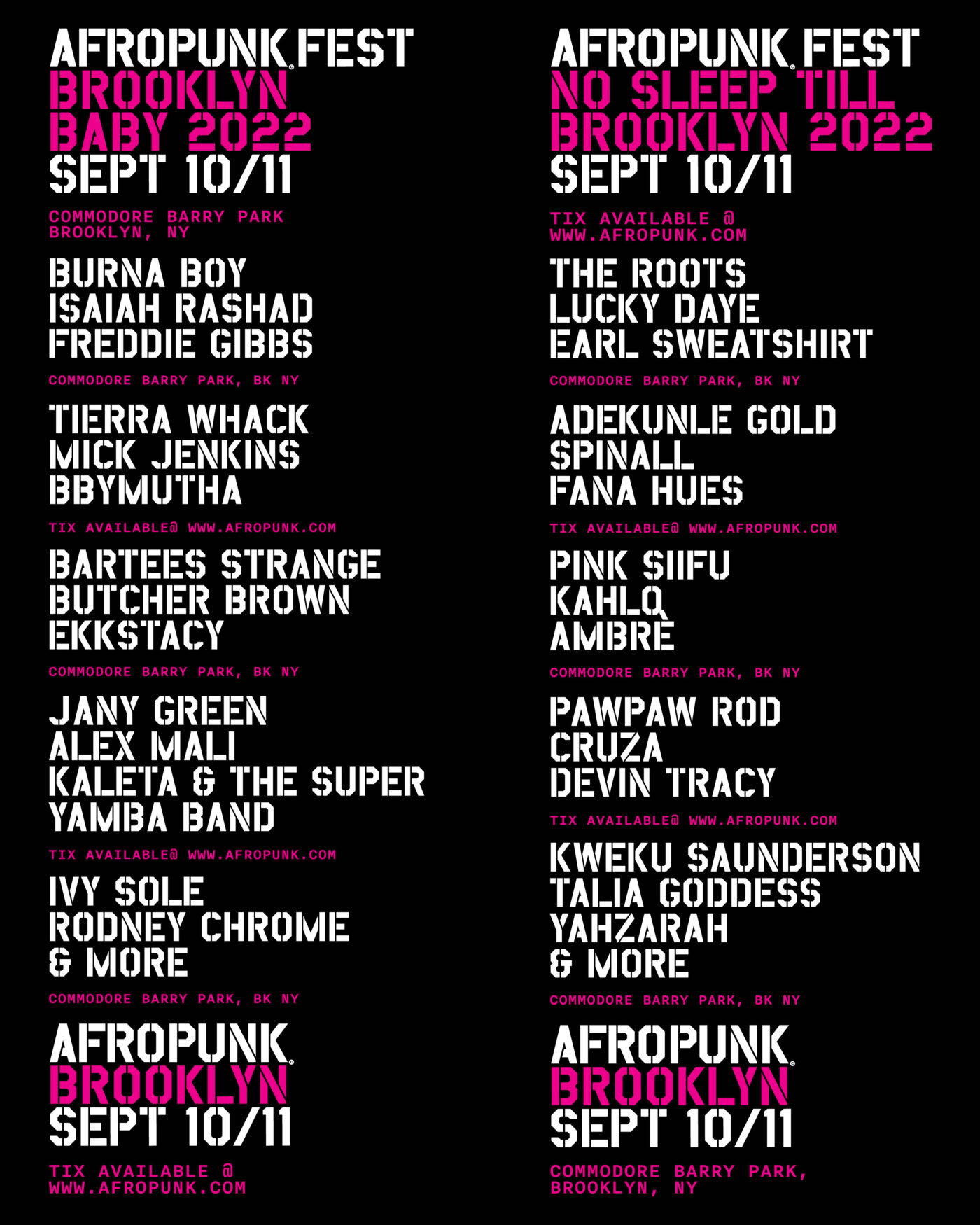 AFROPUNK evolved from an idea, to a single-day event, to a worldwide movement, but its heart still lies in Brooklyn, where it was founded in 2004. Today, the world-renowned festival announces the lineup for AFROPUNK Brooklyn 2022, its first Brooklyn festival since 2019, recruiting headliners The Roots and Burna Boy. A celebration of Black joy and a testament to the resilience of the Brooklyn community, AFROPUNK touches down in Commodore Barry Park on September 10thand 11th.

Citi Cardmember-exclusive presale tickets are available now. Fans who sign up to the AFROPUNK Community by texting “AFROPUNK” to (718) 550-6268 will have exclusive access to presale pricing ($135 + fees)  before the price increases for the general on-sale tickets ($160 + fees). The AFROPUNK Community presale starts on Thursday, June 16th, at 10 AM ET, and general on-sale tickets are available on Friday, June 17th, at 10 AM ET.

The relaunched AFROPUNK Brooklyn brings a constellation of the most exciting artists in modern music to Commodore Barry Park. The legendary Roots crew headlines the first night, celebrating their 30th anniversary as a band with a set that draws from their decade-spanning catalog. Closing out the festival on the second night is Burna Boy, performing songs from his upcoming album Love, Damini during his first headlining set at a U.S. festival and his first show in New York City since he sold out Madison Square Garden in April.

Beyond the headliners brings a group of game-changing names looking to make a statement at AFROPUNK. TDE rhymer Isaiah Rashad graces the stage for his first-ever AFROPUNK performance, ready to embrace an inclusive and accepting new community as he continues the latest chapter in his life and career. Notable big names on the lineup include Lucky Daye, Freddie Gibbs, Tierra Whack, and Earl Sweatshirt, who performed at his first AFROPUNK since reuniting with Tyler, The Creator and Syd at AFROPUNK 2016.

The AFROPUNK lineup highlights the diversity of sound and style present in the Black music community, bringing standout acts from all genres and nations to Commodore Barry. Rising star Bartees Strange makes his AFROPUNK debut, bringing his personal and hard-charging rock music to the stage. Richmond, VA quintet Butcher Brown made their name with laid back instrumental jazz, but their upcoming  AFROPUNK performance shows off a new direction, with prominent guest vocalists, some of whom will join them on stage. Known for blending R&B with traditional AfroBeats, Nigerian artist Adekunle Gold follows behind Burna Boy as a contingent of exciting artists from the African continent, including rising artist SPINALL, whose hit “Palazzo” w/ Asake is climbing Billboard’s Hot Afrobeats chart.

AFROPUNK is a festival for the community, so it’s only natural that the festival welcomes artists from the Brooklyn community to the stage. Slated to perform are Rodney Chrome, a rising Brooklyn rapper, Alex Mali, the self-proclaimed “alt-R&B queen,” and Talia Goddess, an exciting hip-hop artist from the borough. Stay tuned to AFROPUNK on socials and text “AFROPUNK” to (718) 550-6268 for more announcements about lineup additions, as more exciting names join the bill.

AFROPUNK is more than a festival, it’s a celebration of life, music, food, and culture in the Black community. As always, AFROPUNK offers an exciting array of unique activations to entertain and enlighten attendees between sets. AFROPUNK hosts the Spinthrift Market, a shop market full of talented makers, selectors and curators from the New York area, and AFROPUNK’s Bites ‘n Beats, which provides event goers an opportunity to indulge in cuisines from NYC chefs and local food trucks.

Stay tuned for more information on these activations, and more to be announced.