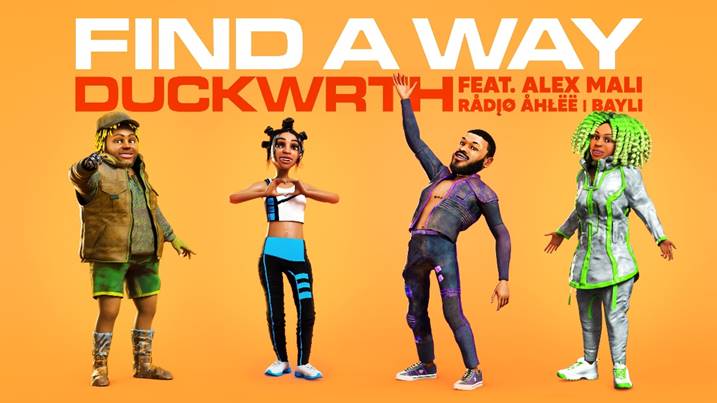 Directors Mark Rubbo and Chad Tennies developed the concept for a CGI fully animated music video with 3D camera moves rendered in real-time, creating stylized avatars for the inspirational song. The visual matches the ebulliently effusive energy, potent power and grooves of the track. A colorful animated interpretation of “Find A Way,”it plays out like a high-octane flick somewhere between Avatar and Black Panther. It also shows the scope of Duckwrth’s ever-expanding vision.

The South Central sonic insurgent continues to garner acclaim. On “Find A Way,” HYPEBEAST wrote, “The single serves as an uplifting anthem during these troubling times, featuring lyrics that showcase the artist’s ability to reminisce about the past and see a way forward.” Earmilk put it best, “The single plays as a welcome beam of light during a dark time.”

Over the last five years, LA-based wunderkind Duckwrth has quickly risen up the ranks as a promising star of the future of music. His collection of critically acclaimed projects including Nowhere (2015,) I’m Uugly (2016), Xtra Uugly (2017) and The Falling Man EP (2019), have transcended streaming platforms and landed in films, TV series, and brand ad campaigns and have received critical acclaim from a vast amount of outlets including NPR, The FADER, Complex, XXLand more. This cumulation has led the rapper to become an international touring staple, headlining shows globally and performing at Austin City Limits and opening for superstars Billie Eilish and Anderson .Paak. Duckwrth’s music has appeared on shows like CW’s All American, HBO’s Insecure and Real Time with Bill Maher and his song “Start A Riot” was featured on the Spider-Man: Into the Spider-Verse soundtrack. His music has appeared in campaigns for the likes of Cadillac, Microsoft, Peloton, Amazon and Apple Music, and he’s worked with fashion legacies like Levi’s, Vans and Fila, as well as high fashion men’s suit designer Paul Smith.