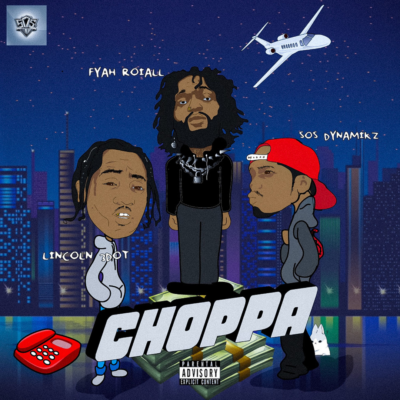 Fyah Roiall (pronounced “fire royal”) teams up with Miami-based, Jamaica-born dancehall artist Lincoln 3dot and super producer/rapper SOS Dynamikz to drop some serious lyrical shade on bragging about “choppin’” in your music. This recent trend in Jamaican music begs the question, would one really admit to committing a crime and brag about it in their music? Everyone in Jamaica knows… “real badness a nuh supn fi show off.”

“Choppin’” is patois for how Jamaicans refer to participation in the ‘lotto scam’ — a practice where unsuspecting Americans receive phone calls congratulating them that they have won a large sum of money, but first, will need to send a small fee to ‘release the winnings.’ Choppin’ is a growing economic practice, associated with skyrocketing unemployment rates in Jamaica, especially amongst the youth. One needs to understand the root of choppa culture to understand why it’s seen as a socially acceptable solution as opposed to a crime.

The essence is about Jamaicans’ relationship to hustling and not letting poverty hold someone down even if it requires ‘more creative’ and ‘unbecoming’ measures. In Jamaica, where the average laborer makes US$400 a month as a cashier or grocery clerk, it’s hard not to see why struggling folks opt for a hustle.