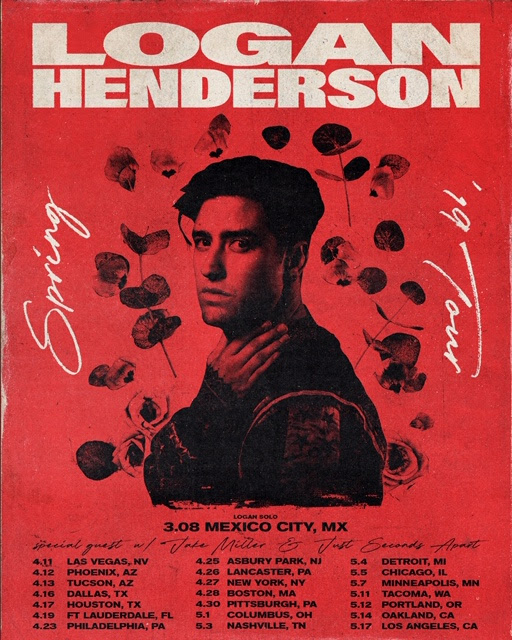 Singer-songwriter, musician, and recording artist Logan Henderson will support fellow label mate Jake Miller on his 21-date spring ‘Wait For You’ Tour, starting April 11 in Las Vegas and ending May 17 in Los Angeles. The tour will hit major markets in the U.S. including New York, Chicago, Houston, Nashville, and more. During these shows, Logan will perform new music off his forthcoming EP–the second installment and follow up to 2018’s Echoes of Departures and the Endless Street of Dreams due out this spring via RED MUSIC–featuring the lead single “Pull Me Deep,” which recently became Logan’s second consecutive Top 40 hit on pop radio with nearly 6 million cumulative streams. Tickets for the ‘Wait For You’ Tour will go on sale to the public on Friday, February 1 at 10:00 am local time HERE.
On his upcoming tour, Logan says, “I’m excited to see all of my fans out on tour this spring! I’ll be
returning to Mexico City first on March 8th and then hitting the road with my good friends Jake Miller and Just Seconds Apart. I can’t wait to finally perform the new music I’ve been working on for my fans.”
Echoes launched Logan’s long-awaited solo debut since his departure from the multi-platinum pop powerhouse band Big Time Rush. With the group, Logan gained international recognition and sold millions of records worldwide, including the group’s platinum-certified 2010 self-titled album, BTR which debuted at #3 on the Billboard Top 200. Armed with a wealth of new solo material and an exciting new live show, 2019 continues to show Logan Henderson in a brand new light, as an artist taking full control of his sound and letting the music do all the talking.

Meagan Good Stars In “Death Saved My Life” on Lifetime