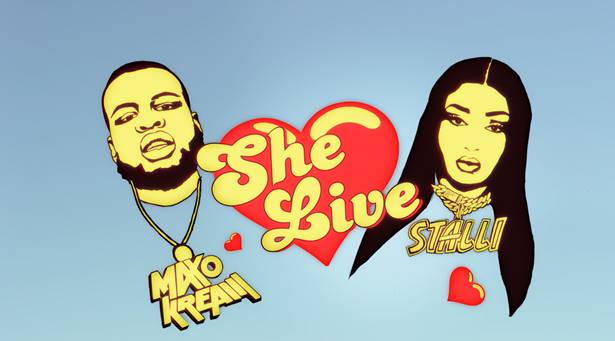 The visual, which is directed by Omar Jones, sees Maxo and Megan paying homage to rapper Flavor Flav’s reality television show, “Flavor Of Love”as they look to find their respective love interests.

Maxo also announces European headlining dates for the “Brandon Banks Over C’s Tour” for December this year. They will follow the previously announced “Brandon Banks” headlining North American fall tour. Kicking off on October 16th in New Orleans, the tour will hit major markets across the US including Atlanta, New York, Chicago and San Francisco before wrapping in El Paso, TX on November 17th. The tour, which was first announced on Wednesday, will feature direct support from Q Da Fool. Tickets are available to purchase now. For more information and to purchase tickets please click HERE.

Brandon Banks was led by singles, including “Meet Again,” listed by Esquire, Billboard, and Vulture as one of 2019’s best songs so far and boasts a video directed by Shomi Patwary. The album also includes “Still” and “She Live,” featuring fellow Houston emcee Megan Thee Stallion.

The culmination of a journey from struggle to triumph, Brandon Banks brings listeners back into the world of Maxo Kream–a world that contrasts the grim realities of poverty with the luxurious life of a successful rapper. Born Emekwanem Ogugua Biosah Jr., Maxo grew up idolizing his father who spent much of Maxo’s youth in-and-out of prison–in his illegal enterprise, his father used the alias Brandon Banks. The album finds Maxo grappling with his newfound fame–as a budding star, Maxo has no need to return to his previous life, but he is still very attached to friends and family in the street, who he is not quite able to lift out of their circumstances. Also included on the album are skits and adlibs from Maxo’s father himself, empowering words of wisdom to his son.

Keep Up with Maxo Kream: