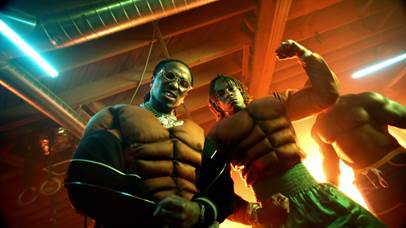 Today, multiplatinum rapper Rich The Kid releaseshis new video for “That’s Tuff” feat. Quavo. In the hilarious video, Rich The Kid and Quavo team up to take over a gym while pumping iron, living up to the title of the track.

Rich The Kid is returning with his new release with his new partner label Republic Records and is looking toward 2020 with his greatest music yet. In 2017, Rich The Kid delivered his intoxicating “New Freezer” with Kendrick Lamar. The RIAA double Platinum track was followed by the triple Platinum colossal single “Plug Walk” in 2018. At this point, Rich The Kid had merely hit his stride after years of grinding, making records and breaking other acts like the world famous Migos and Famous Dex. Rich’s fame was growing as both a star rapper and label entrepreneur. The World Is Yours debuted in 2018, fueled by the aforementioned “New Freezer” and “Plug Walk.” Titled as a clear nod to Nas, the project showcased how Rich The Kid navigated seamlessly through crafting bangers that not only could live in a club, but also through car radios and AirPods. He followed with The World Is Yours 2 and is now ready to bring the world his new music.