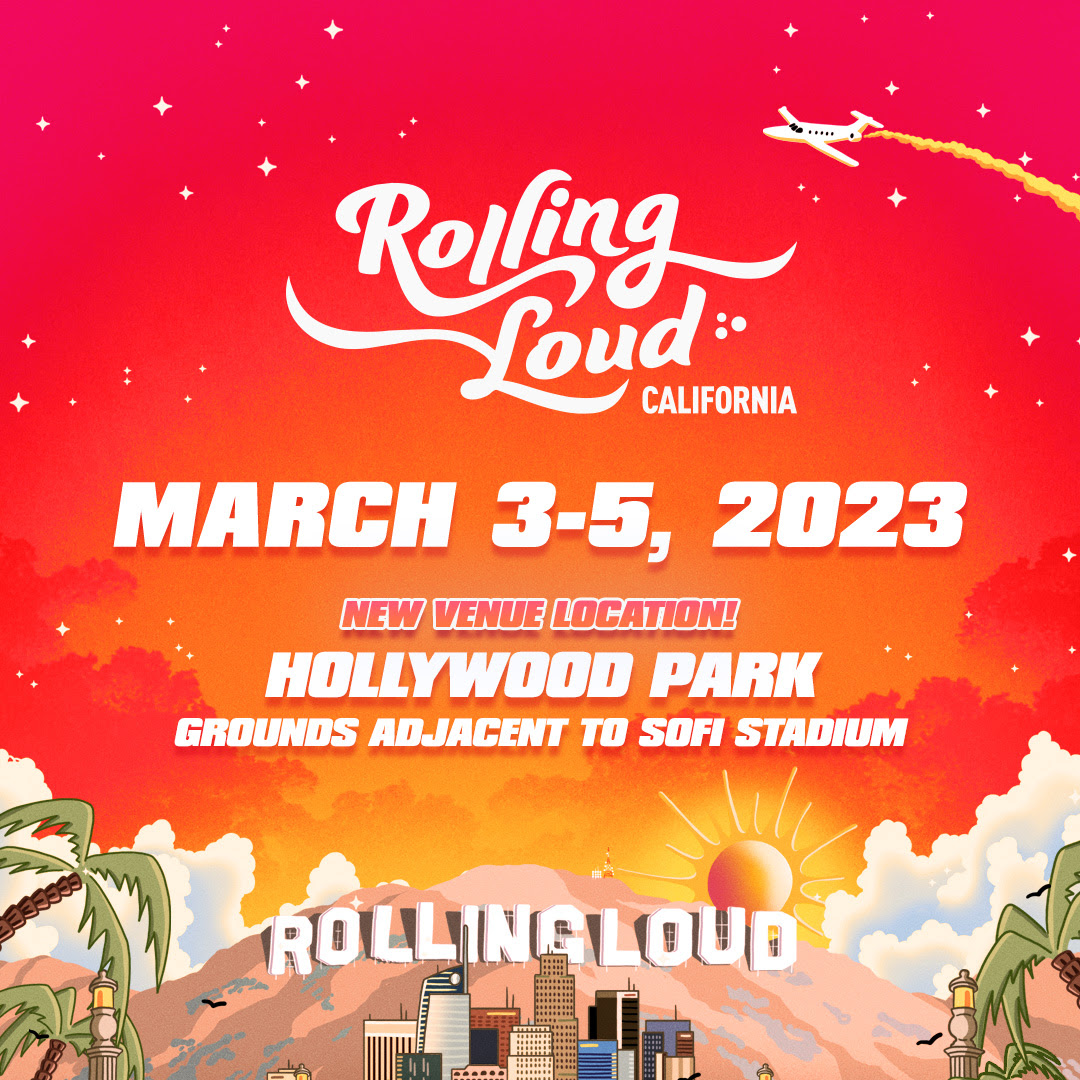 Packed with thrilling performances and unforgettable moments across its global array of events, Rolling Loud is rap music’s biggest stage. Rolling Loud announces its return to the West Coast with Rolling Loud California on March 3-5, 2023. The upcoming festival is the first Rolling Loud in Los Angeles since 2019, and is the first-ever music festival at the 300-acre Hollywood Park, which will be hosted on the grounds adjacent to SoFi Stadium in Inglewood, CA. Fans can register HERE to get notified shortly before tickets go on sale, and can purchase Inglewood-themed Rolling Loud merch at the Rolling Loud shop. Festival lineup and ticket information to be announced soon.

“Rolling Loud is deeply honored to be the first-ever music festival to take place at the incredible Hollywood Park,” say Rolling Loud co-Founders and co-CEOs Matt Zingler & Tariq Cherif. “We’re pumped to return to L.A. and make our debut in Inglewood, such an important neighborhood in rap history. Rolling Loud California 2023 will be an event worthy of its historic location, celebrating the undeniable influence of the West Coast on hip-hop and featuring some of the hottest rappers in the game. Stay tuned for our biggest and best California festival yet!”

Following up 2021’s Rolling Loud California in San Bernardino, Rolling Loud California 2023 makes a triumphant return to South Central Los Angeles. One of rap music’s most historic neighborhoods, South Central L.A. helped define the sound of the genre, and developed an untold number of rap icons. Inglewood itself played a major role in hip-hop history, earning shout outs from Dr. Dre on “California Love” and “The Next Episode,” producing West Coast legends like Mack 10 and Shade Sheist, and contemporary stars like Omarion, D Smoke, SiR, and many others. Rolling Loud California aims to celebrate the rich history of West Coast hip-hop–paying tribute to its icons and highlighting its current and up-and-coming stars–while bringing some of the genre’s biggest names from all regions to shut it down at Hollywood Park.

“As the world’s largest hip-hop festival, Rolling Loud will bring fans from around the globe to our Inglewood community,” said Jason Gannon, managing director, SoFi Stadium and Hollywood Park. “Hollywood Park’s 300-acres lends itself to hosting a variety of large-scale events. With Rolling Loud as our first music festival, we will further showcase Hollywood Park as a global stage and multifaceted entertainment destination.”

Yesterday, Rolling Loud debuted the Rolling Loud California 2021 Aftermovie, an expertly-crafted and curated video that shows what makes the festival special. Highlights from the Aftermovie include performances by J. Cole, Kid Cudi, Trippie Redd and many more, plus a memorable guest spot from Ye during Future’s festival-closing set.

Led by its founders Matt Zingler and Tariq Cherif, Rolling Loud is on a mission to lead the vanguard of live music experiences in hip-hop and beyond. Stay tuned for many more announcements.

Before Rolling Loud returns to L.A., the biggest live brand in rap takes the show on the road for more concerts in 2022, including the inaugural Rolling Loud Toronto on September 9th-11th with headliners Future, WizKid, and Dave, and just two weeks later, the fest comes back to rap’s birthplace for Rolling Loud New York 2022, its third New York festival, headlined by Nicki Minaj, A$AP Rocky, and Future, on September 23rd-25th. Rolling Loud hosted its flagship Rolling Loud Miami festival in July, gathering the culture for one of the most exciting events of the year, featuring headlining performances from Kendrick Lamar, Kid Cudi, and Future, plus special appearances from Ye and Travis Scott.