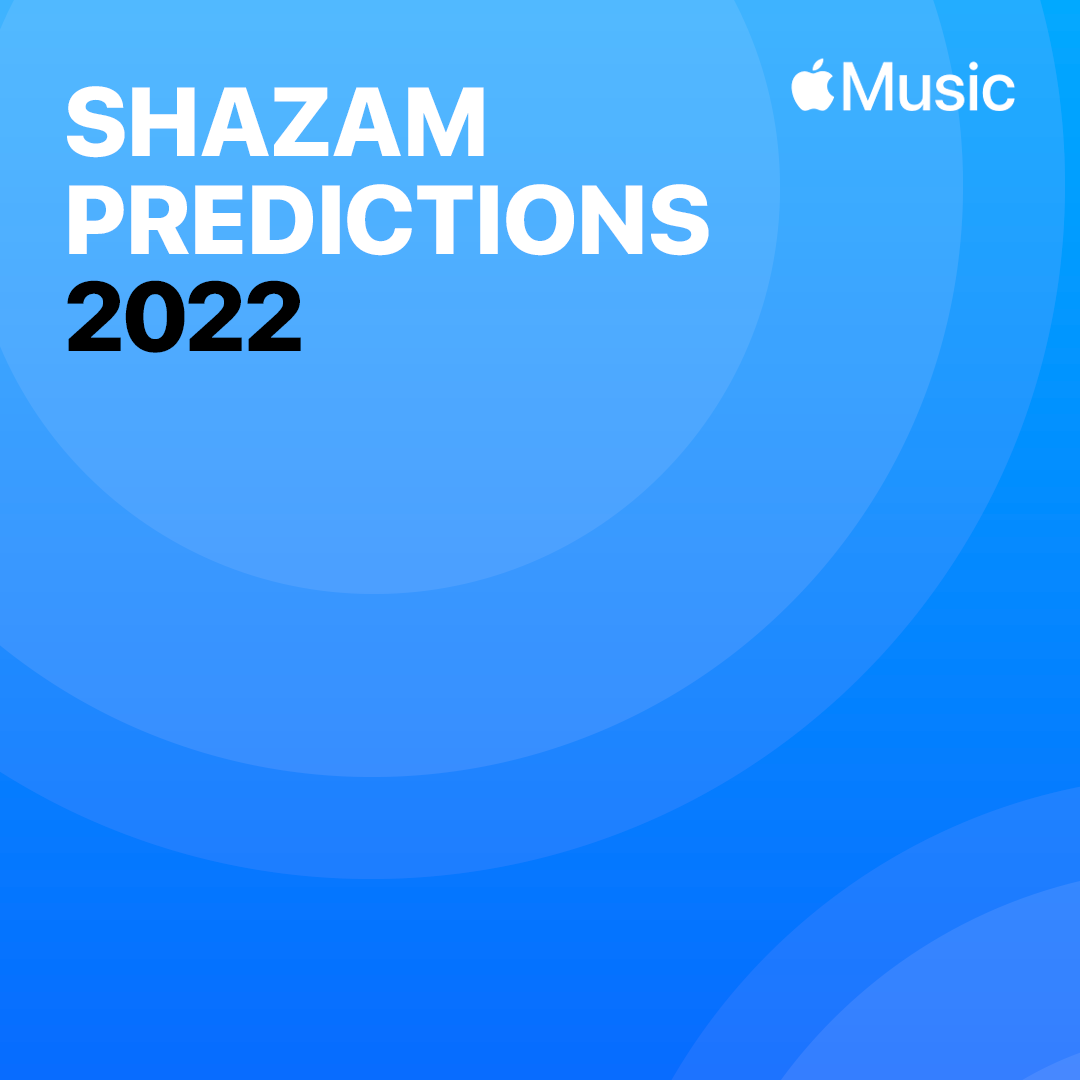 With over 1 billion songs identified each month, Shazam uncovers artists from every corner of the world earlier than any other service, using the curiosity of everyday fans to tell a story of what’s next. Each year brings a new group of artists who seem to rule their particular corners of the music ecosystem, compelling listeners to seek out the songs they can’t get enough of.

Today, Shazam unveils its Predictions 2022 playlist and highlights five artists that, according to Shazam’s powers of prediction, will make a splash in 2022. Based on Shazam’s uniquely predictive data and algorithms, and hand-selected by Apple Music’s global editorial team, the 50-track selection features songs that show early indicators of future growth — early and consistent momentum in Shazam activity, as well as discovery in more than one country. The playlist is a remarkably global and diverse bunch, with emerging artists hailing from 25 countries and representing 17 genres, from mandopop to regional mexicano and hip-hop hybrids.

5 artists to watch according to Shazam’s Predictions

Ayra Starr’s rise this year was largely mounted on her breakout track “Bloody Samaritan,” which had its first Shazam in Lagos. It was released as the lead single of the Nigerian singer-songwriter’s debut album 19 & Dangerous, but took on a life of its own as listeners were drawn in by an alluring violin melody that drops into contagious Afropop magic. An undeniable jam, “Bloody Samaritan” was the most Shazamed song by a local female artist in Nigeria this year—an impressive accomplishment considering it came out only in July.

Fans of trio-turned-duo Eslabon Armado probably need no introduction to DannyLux. The rising Mexican American singer is featured on “Jugaste y Sufrí,” which holds the honor of being this year’s most Shazamed regional mexicano track. Though it was released at the end of 2020, TikTok embraced it, helping to rocket songwriter DannyLux to new levels of acclaim. He’s part of a wave of young artists reinventing corridos for a new generation and only stands to reach more listeners in the coming year.

Singer-songwriter Lyn Lapid is no stranger to viral success—her song “Producer Man” helped jump-start her career in 2020. With “In My Mind,” a mellow but soulful anthem for the quiet kids, she struck gold again. It became her most Shazamed song, charting in six countries, including Brazil, Indonesia, and the US. Though this one strikes a slightly different chord from her breakout, it only further highlights the many tools Lapid has in her arsenal, ready to be deployed as she takes on the new year.

Mixing up a hypnotic blend of electronica, hip-hop, and Britpop, duo Sad Night Dynamite has a style that’s hard to define but captures the ear no less. Their eponymous debut mixtape, from February, ping-ponged between genres, but it was their latest single “Demon” that seemed to especially resonate. “Demon,” which features South African musician Moonchild Sanelly, is industrial and ominous, earning a spot on the FIFA 22 soundtrack. It also brought the pair their biggest Shazam success, with their all-time daily Shazams peaking soon after its release.

In April, K-pop girl group STAYC released an effervescent ball of bubblegum pop titled “ASAP.” And every day since then, the single has remained on the South Korean Shazam chart. Pulled from the group’s second single album STAYDOM, “ASAP” has powered their rise as they continue to hone their Technicolor melodies and natural pop proficiency.