Since staking his claim as “King of the Bronx,” Ron Suno has yet to turn down his charismatic intensity. Returning to expand his empire beyond the BX, Ron teams with Brooklyn heavy-hitters DUSTY LOCANE and Rah Swish to share his new video single, “SHOES,” from his upcoming SUNO MODE project.

The MP Beatz & YMadz-produced track, anchored by the oddly effective coupling of hair metal guitar riffs and reggae-stye offbeat strums with drill percussion on the instrumental, finds Suno and company ringing off cautionary flexes to the opps.

Ron Suno goes crosstown to tap one of NYC’s slickest, Rowdy Rebel, for the “What They Gon Say” remix. Ron Suno is a necessary force of fun in today’s drill scene. Though he’s known for bringing the ruckus from borough to borough, Ron’s coming with a different energy this summer with SUNO MODE, his next project.

Blessed with serious emcee skills and a boisterous personality, Ron Suno is on a mission to make NY drill fun. Blending his booming Bronx energy with DUSTY LOCANE‘s fierce Brooklyn attitude, Suno shares “Grabba” (Remix), a new version of his buzzing single. A seismic event in the world of NY rap music, the new remix is a collaboration between two of the biggest breakout stars in the outer boroughs–the comedic Suno and the street-savvy LOCANE have electric chemistry, the Canarsie rapper flexing his wordplay and getting on Suno’s wavelength: “You ain’t solid, break him like a Kit Kat.”

In the video, Suno, LOCANE, and their respective crews take their Outer Borough braggadocio to the heart of Manhattan. The Janoff FIlms-directed video finds the two rappers and their posses making a scene in Times Square, as they block the entrance to a Broadway theater, jump on stopped cars, and mess with tourists. The video for the “Grabba” (Remix) is the latest upward step on the meteoric trajectory of “Grabba,” a highlight from Ron Suno’s Jokes Up project, which has over 1.4 million video views and is picking up steam on TikTok. 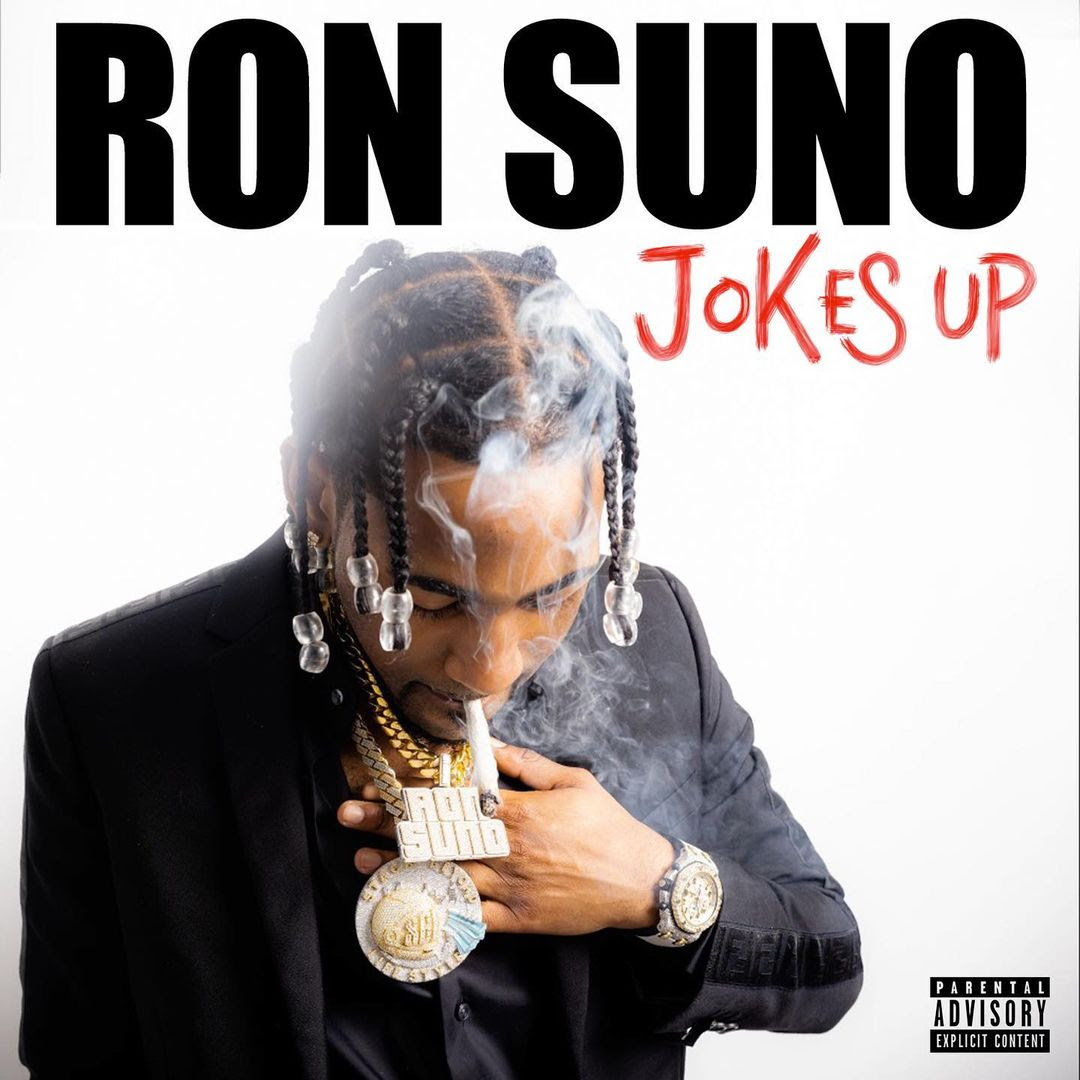 Unleashing an endless torrent of punchlines with his forcefully nimble flow, Ron Suno is a funny guy with serious talent. Dropping the comedic facade and letting the artist shine through, the 20-year-old Bronx native shares Jokes Up, his new project. A master of many disciplines, Suno approached the creation of Jokes Up with laser focus, determined to prove his worth as a rapper. He used to create songs by freestyling, but for the music on Jokes Up, Ron flexed his pen game, focusing on the message of his music and massaging his bars until they seamlessly flow together. Combining a locked-in flow with snappy lyricism and quips that humorously undercut his bravado, the SBL rapper takes his emceeing to a new level on Jokes Up, nimbly tiptoeing atop skittering hi-hats and going toe-to-toe with some of the finest rappers in the Five Boroughs.

“Jokes Up is an elevation,” says Ron Suno. “All my life I’ve been challenged. People thought I couldn’t be serious. With Jokes Up, I’m showing people that I’m one to be taken seriously, even if not everything I say is serious. My last project, Swag Like Mike, was a project that introduced me and showed off my personality. On Jokes Up, I want to prove that I’m one to watch for the future. I’m Ron Suno, you gotta know me.”

Seamlessly blending hard-nosed reality raps with charismatic comedic chops, Bronx-born Ron Suno is one of a kind. Teaming up with a Tri-State legend for his latest banger, Ron shares “Drill Zoo,” featuring the one-and-only Fetty Wap. As its name implies, “Drill Zoo” boasts the sliding 808s and skittering hi-hats common in NYC drill, but adds a dose of spritely piano and melodic runs from the “Trap Queen” hitmaker. Running roughshod over the instrumental with pugilistic bars, Ron slyly mixes tough talk with wry punchlines, leaving space for Fetty Wap to shine with his trademark auto-tune. In the video, directed by the SBL rapper’s favorite director David Janoff, Ron and Fetty sip bubbly in a Rolls Royce before they reach the hood and Ron shows off his nimble dance moves.

Following up the recent video for “Ya Mans“ (over 340k views on YouTube), “Drill Zoo” is the latest video single from Jokes Up, Ron Suno’s upcoming album. Combining a locked-in flow with snappy lyricism and quips that humorously undercut his bravado, Ron Suno takes his emceeing to a new level on Jokes Up, nimbly tiptoeing atop skittering hi-hats and going toe-to-toe with some of the finest rappers in the Five Boroughs. The upcoming project is home to recent singles like “Winners,” a fiery new collab with Brooklyn figurehead Sheff G that has over 1.6 million views on YouTube, “Bandit,” a fiercely slick banger with over 950k YouTube views, and “Netflix,“ a 2020 banger with over 1 million streams across platforms. The proper follow-up to Ron’s 2020 project Swag Like Mike, Jokes Up arrives on July 2nd via SBL, LLC / EMPIRE.

On the come up as a New York drill rap star, Rah Swish can do more than just spit fire, Paying tribute to a 1992 2Pac-starring classic, Rah Swish shares BK Juice, his new short film. Connecting with fellow New York rapper Ron Suno and members of his own crew, Rah puts a Brooklyn spin on the cult classic, portraying a classic story of ego, greed, and the ultimate betrayal. Directed and produced by legendary Trackmasters duo Poke and Tone, BK Juice is the follow-up to last year’s BK Belly, inspired by the 1998 Hype Williams-directed and DMX-starring film–BK Juice picks up where the cliffhanger left off.

Enhancing its compelling and engrossing narrative, BK Juice features new music from Rah Swish’s upcoming project MAYOR OF THE STREETS, out next week. The follow-up to last year’s WOO Forever project, MAYOR OF THE STREETS finds Rah Swish projecting a supernatural aura of confidence with his nimble flows and energetic ad-libs. The project is home to recent singles like “WOO IT AGAIN,” “Woo Back,” and “Warm Ups,” as well as “HASHTAG RS” with Ron Suno, a standout track from the project that appears in BK Juice.

With rhyming skills as serious as his comedy is hilarious, Bronx-born Ron Suno is a new kind of entertainer. Ready to prove his rap bonafides while injecting the boisterous personality his growing fanbase loves, Ron announces Jokes Up, his upcoming album. Combining a locked-in flow with snappy lyricism and quips that humorously undercut his bravado, Ron Suno takes his emceeing to a new level on Jokes Up, nimbly tiptoeing atop skittering hi-hats and going toe-to-toe with some of the finest rappers in the Five Boroughs. The upcoming project is home to recent singles like “Winners,” a fiery new collab with Brooklyn figurehead Sheff G that has over 1.6 million views on YouTube, “Bandit,” a fiercely slick banger with over 950k YouTube views, and “Netflix,“ a 2020 banger with over 1 million streams across platforms. The proper follow-up to Ron’s 2020 project Swag Like Mike, Jokes Up arrives this summer via EMPIRE.

Along with the announcement of the project, Ron Suno shares “Ya Mans,” a brand new music video. Armed with a pitch black drill instrumental, complete with horror-film synths and thumping 808s, “Ya Mans” takes aim at all comers who’d dare step to Suno, poking fun at fake gangstas who don’t realize that real g’s move in silence. In the video, directed by David Janoff, the man behind the “Winners” video, Ron wilds out in the Bronx with a crew of homies and a beautiful blonde, riding outside the windows of cars and showing off his boisterous dance moves.

“You know the f*ckin’ vibes,” says Bronx rapper Ron Suno at the start of many of his tracks, and for many fans it’s true–only Suno can provide such a seamless blend of hard-hitting raps and incisive comedic chops. Today, Suno shares “Winners,” a fiery new collab with Brooklyn figurehead Sheff G. A kinetic drill anthem, “Winners” is an excellent showcase for Suno’s locked-in flow and snappy lyricism, as he combines tough-talking boasts with quips that undercut his bravado: “I can’t wait ’til we catch ’em, we get ’em/Leave in the Buick, I hop out the Civic,” he spits. Meanwhile, Sheff G shows why he’s one of the most exciting rappers in NYC, matching Suno’s rapidfire flow and occasionally delivering his rhymes in a foreboding whisper.

The @JANOFFFILMS-directed video finds Ron Suno and Sheff G driving around the Five Boroughs in a Rolls Royce before meeting up in the hood with a crew of homies and some beautiful women.

Kansas City hip hop artist Flash Gottii releases the new visual for his track “Talk My Shit” featuring Ron Suno, today.  The track is featured on Flash’s recent EP, 20/20 Vision, which was released in March.  The visual was directed by Hoso Films and shows Flash falling asleep and drifting into a New York dream.

The 20/20 Vision EP has over 800K streams, and includes Flash’s previous singles, “Paper Chase” feat. Trippie Redd, and “Same Ones.” The EP also features production by multi-platinum hitmaker D.A. Got That Dope [“Taste,” “ZEZE,” “Godzilla”] and is available now via eOne/100 Entertainment.