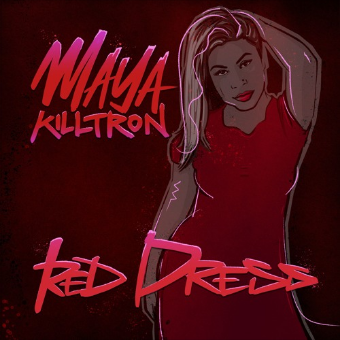 “Red Dress” is about how hard it is to date another musician. It can be hard AF. At first, you think “what do I have to do to keep this guy?” As time goes on, you realize you have to keep each other – both of you have to wear the dress.

“Red Dress” follows the same themes as my previously released singles – breakups, booty calls and bad decisions, all dressed up and ready to dance. I wanted to capture the mood of dancing through your bad times. My music is not just a nod or throwback – it also seeks to subvert trends. – Maya Killtron 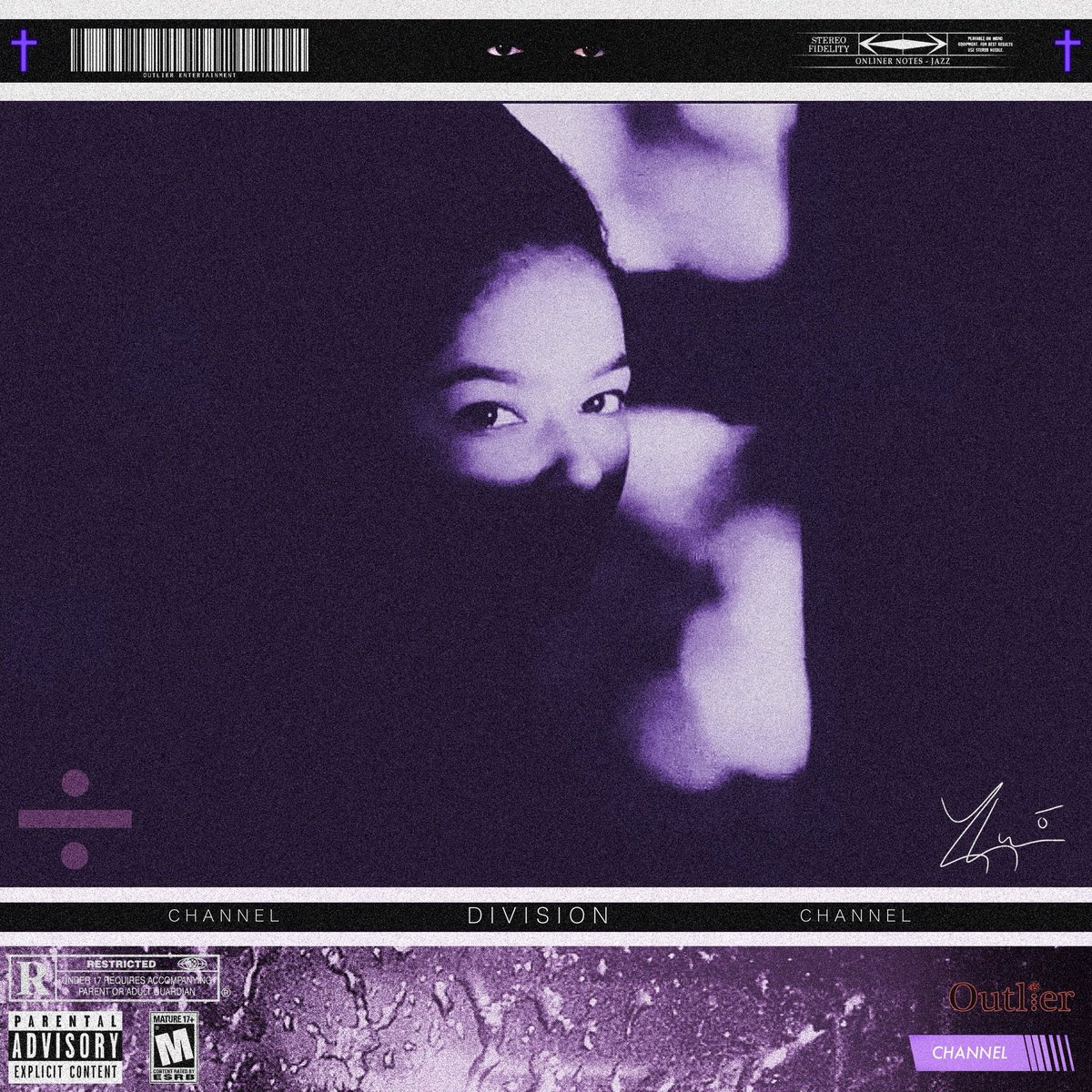 Toronto’s Ziyaad Luceō releases a new streaming project entitled ‘CHANNEL: Division’. ‘CHANNEL: Division’ is a 27-minute experience consisting of 12 tracks. He describes this body of work to be ‘a collective string of unreleased songs’; somewhat like a playlist or mix. ‘CHANNEL: Division’ isn’t like his previously released EP, ‘Late Night Calls’. Production wise the channel is way more upbeat and diverse. From the first record ‘Dishonest’ (which was packaged as Division’s second single release) to the last song ‘Voicemails’, the overall feeling and energy of the project swifts with its tempo and melodic rhythms. Like many of his other work, Ziyaad is able to create a storyline and theme that are very connected to his previous EP where he communicates about his past memories and conflicting emotions. Expressing feelings toward love, friendships/relationships, sex, heartbreak, his Outlier crew and etc. All strung together to present a cohesive project that can be analyzed but also background music for those late night moods. ‘CHANNEL: Division’ is an interesting project that represents a new form of sharing project/bodies of music. 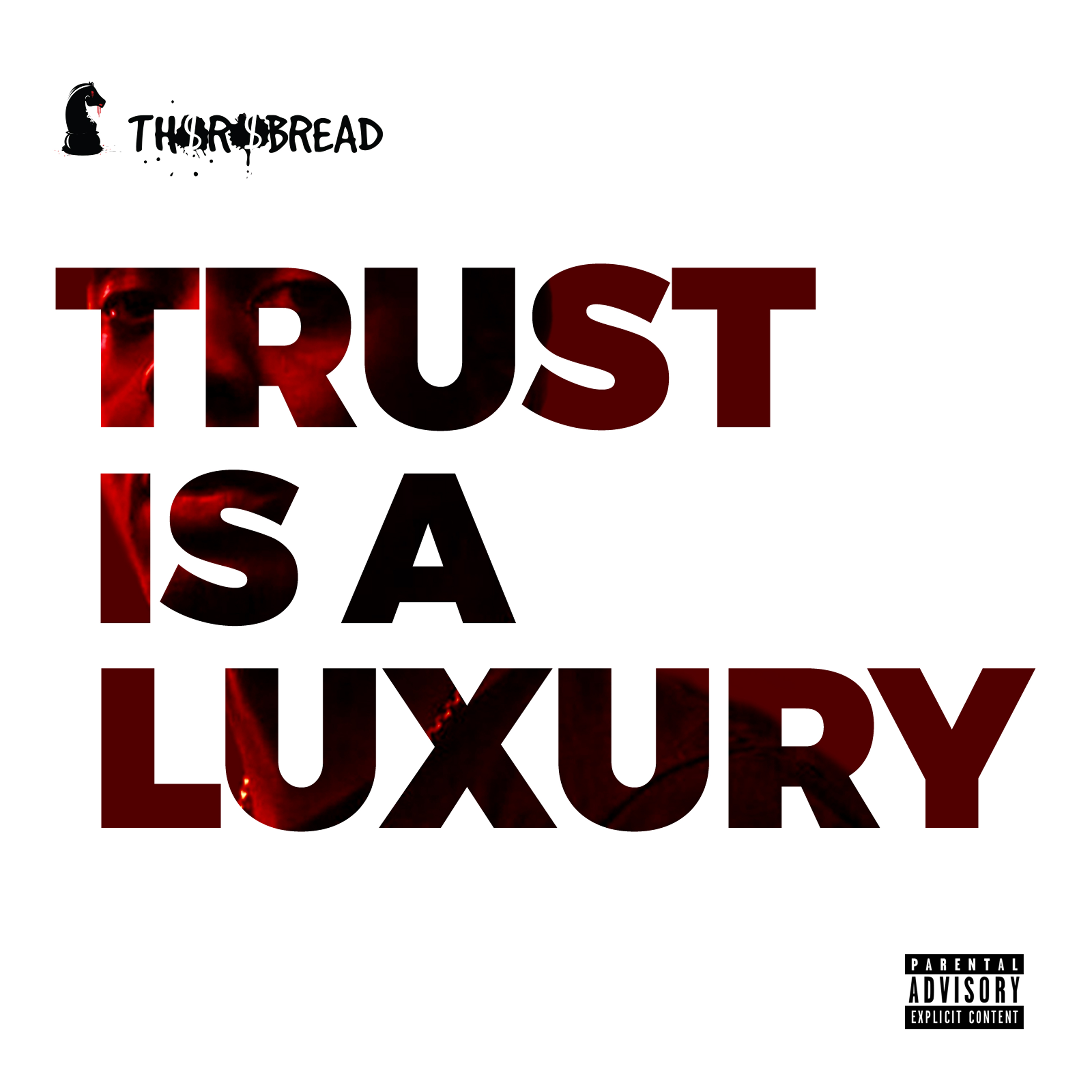 Thorobread is an emerging artist from Toronto, Canada, with a very real story and is an emcee who has really lived his music. After a 6-year hiatus due to life challenges, Thorobread returned to releasing music and has reasserted himself in Toronto’s hip hop scene. Letting his supporters know he’s back and more focused than ever, Thorobread has released a steady string on singles that serve as street anthems reflective of his Finch West neighborhood.

Working with producers such as Jazzfeezy (Drake, TI), Snaz (Drake, DMX, Machine Gun Kelly), TroubleADX (Nav) and more, Thorobread has established a smooth sounding flow over some amazing instrumentals. With releases like “Need More” and “F the Politics” heating up, Thorobread’s latest release “Plaga” has been a stand out among fans. The record features Bronx artist Don Q and was premiered via HipHopDX. The song has since been featured on Ebro’s Beats 1 Radio show as well as being featured on Spotify’s ‘Northern Bars’ playlist highlighting Canadian hip hop.

“Trust Is A Luxury” is a project that is truly reflective of the artist and his environment. Collaborating with great features, the project boosts Tory Lanez, who’s latest album “Memories Don’t Die” has been heating up the charts, as well as Floyd Mayweather’s TMT affiliated artist Friyie from Toronto and HBTL artist Don Q.

Speaking on what the EP’s release signifies for Thorobread and his career, he says

“It’s been along time coming and now we’re finally here, “Trust Is A Luxury” is just one of many new projects to come. Trust when I say its not here to disappoint those who truly support and supported me through my trials and tribulations because it was those same ones that knew I was destined for this.” 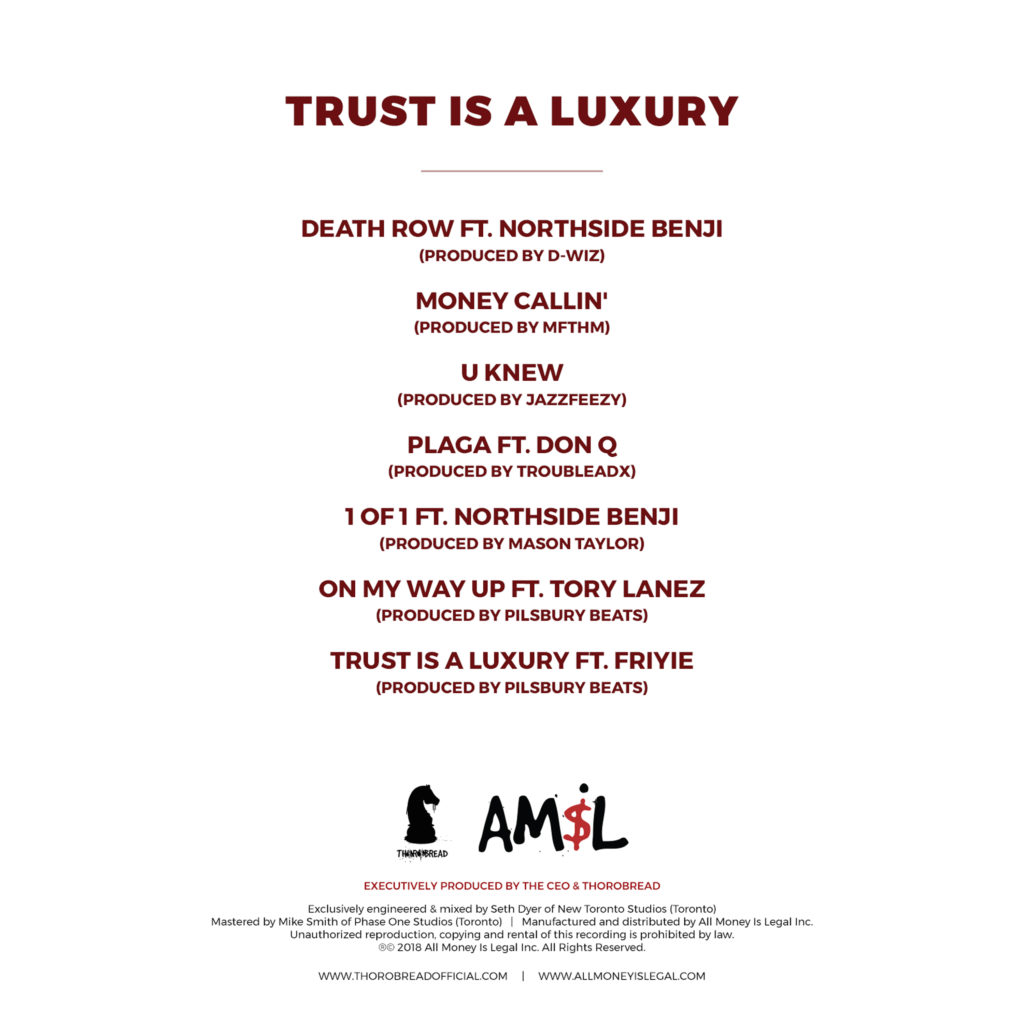 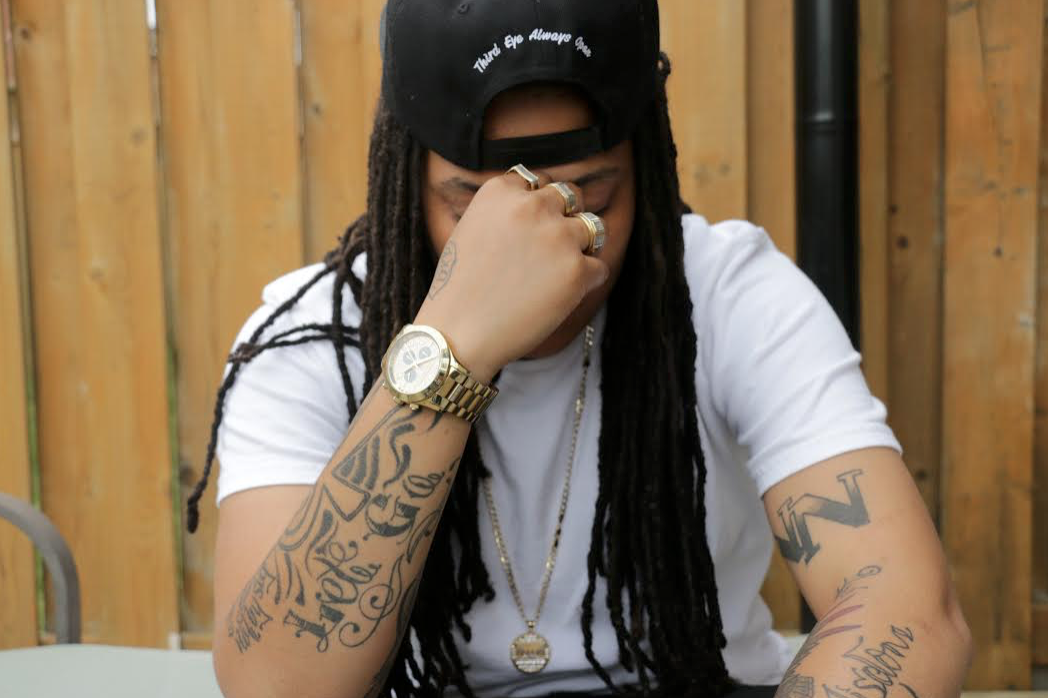 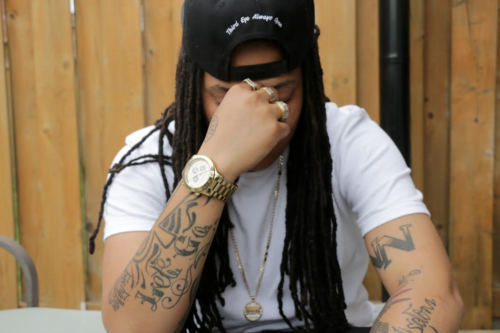 Throughout the video, JellyTooFly, responds lyrically to a series of questions often initiated in the subconscious mind that kick-start survival instincts, self-reflection of trials and tribulations and provokes a call to action to address social injustice.

JellyTooFly will be dropping her upcoming album, Patience, coming soon.” 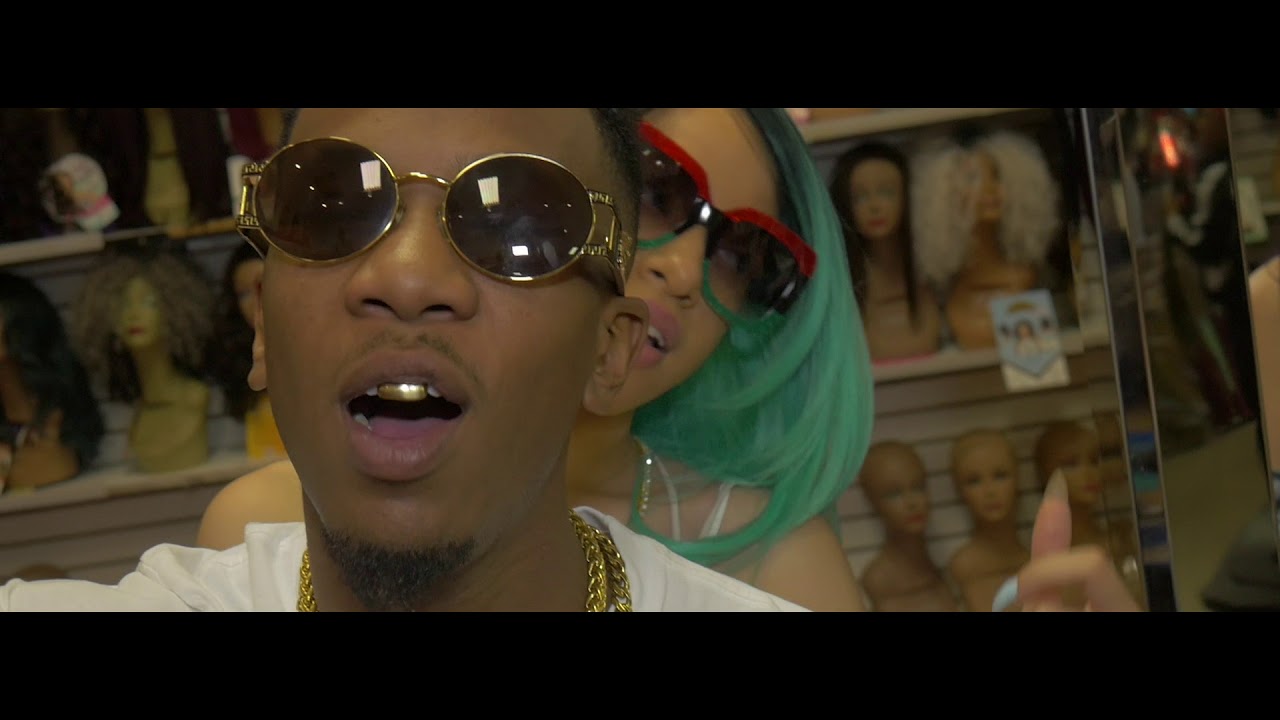 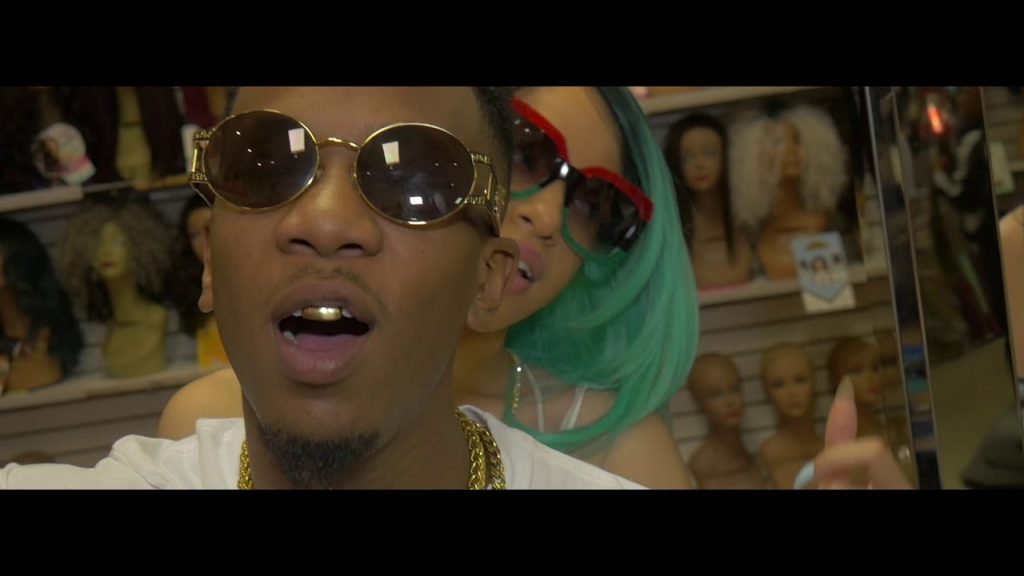 Kaka is a 22 year old artist and producer from Toronto who has been building a buzz with his debut single release “Heroine”. Partnering with Toronto based indie label, GCP, who have a long history in Toronto’s hip hop culture, Kaka’s debut single has been steadily gaining in streams since its release.

The multi-talented artist also co-produced the record with Toronto based producer James Stang. Officially releasing the record via Spotify, Apple Music and Tidal, Kaka is gearing up to release a ton of new content for fans. Generating a buzz with new fans via social media platforms such as Instagram and SnapChat, the record has been organically accumulating streams and growing in strength.

Kaka has now teamed up with director Everything Roses to release the visual treatment for “Heroine”. The video features some trippy visual effects and lets Kaka’s personality shine as he performs the female tribute song to a woman who’s caught his eye.

Be on the look out for new videos and new music coming soon to all stream service providers!

Toronto artists Prince Young and M-Touch unveil their “Sunday To Sunday” music video. A cut off Prince and M-Touch’s Tunnel Vision mixtape, the visual takes place in a church—an apparent parallel to the song’s title. The church represents the medium through which Prince Young and and M-Touch preach to the viewers. For them, “Sunday To Sunday” represents a 24/7 grind of chasing their dreams and staying out of trouble. The record embodies the hustler’s ambition, schooling others about the struggle and what path to take in life. 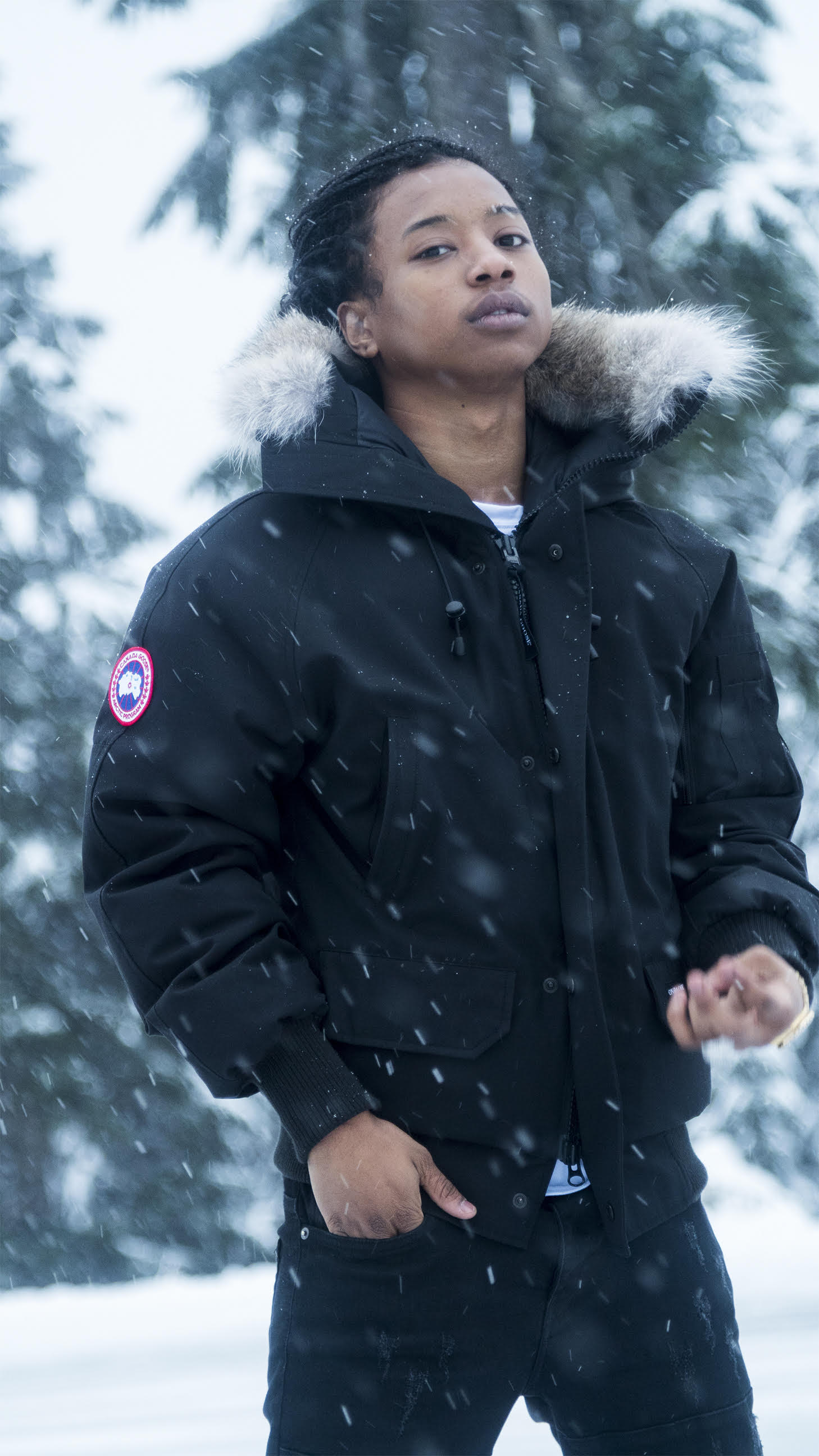 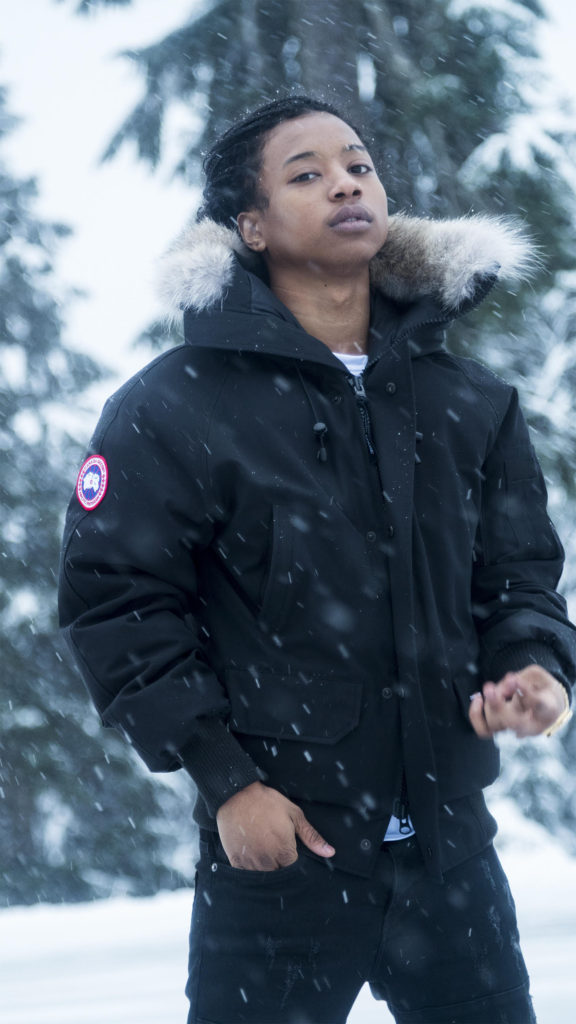 Pressa’s new PRESSABRICK project is officially here. The project has 17-tracks featuring most production by UK’s BricksDaMane. Lately Pressa has been steadily touring and promoting his latest critically acclaimed Press Machine project across Canada. The BFR rapper recently released the new video for his “Canada Goose” single featuring Tory Lanez with the racking 2 million views and rising in the first two weeks. The Canada Goose single was powered by BricksDaMane’s captivating sound. The self-directed video by Pressa is also available to check out below.
The second video titled “Basically” is attacking the game with a new perspective off what Pressa is coming with as a preparation for his upcoming studio album. “Basically” is off the PressaBrick project and was just released on Dec.25th with over 101,000 views. 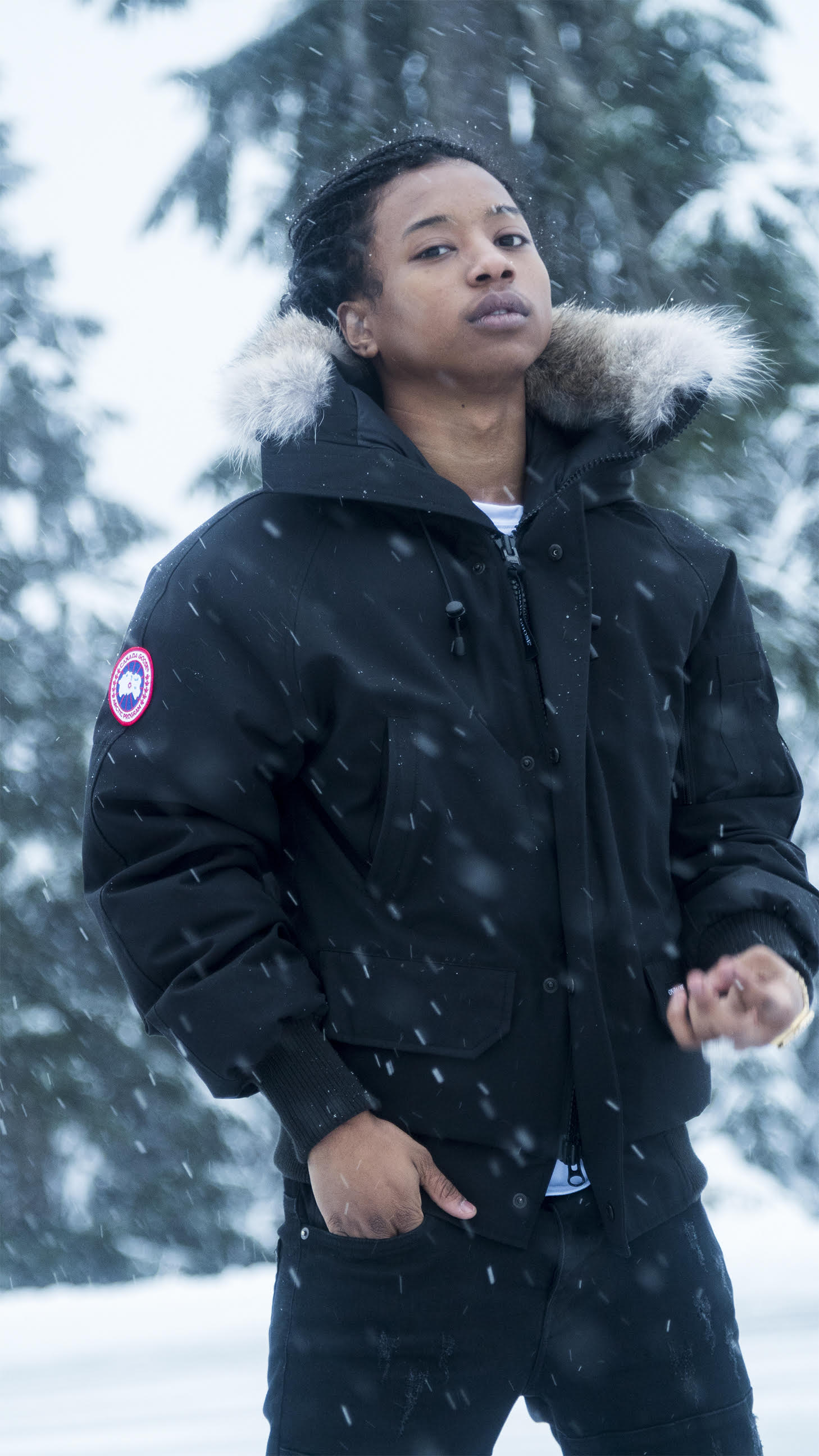 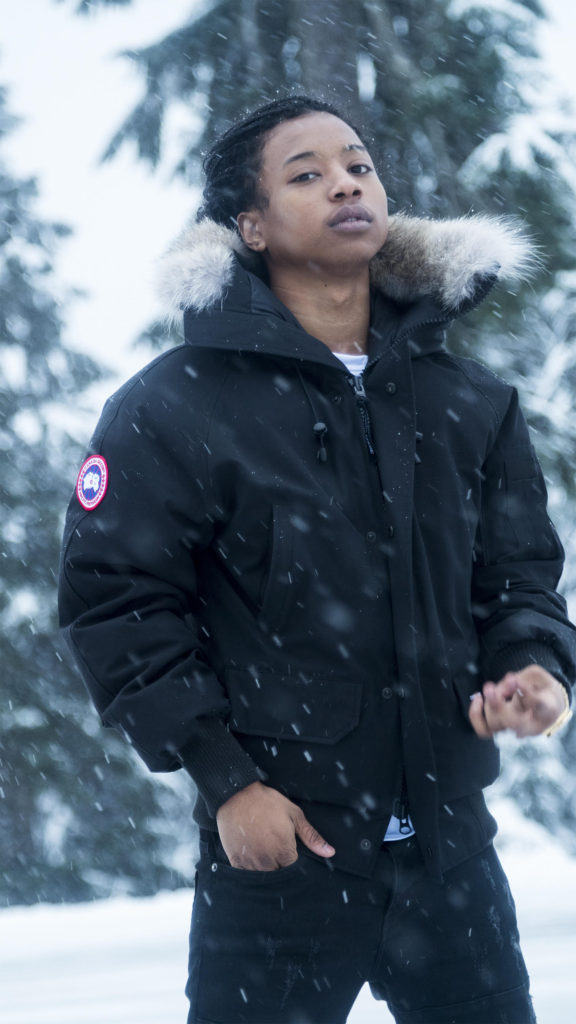 Pressa’s new PRESSABRICK project is officially here. The project has 17-tracks featuring most production by UK’s BricksDaMane. Lately Pressa has been steadily touring and promoting his latest critically acclaimed Press Machine project across Canada. The BFR rapper recently released the new video for his “Canada Goose” single featuring Tory Lanez with the racking 1,300,000 views and rising in one week. The Canada Goose single was powered by BricksDaMane’s captivating sound. The self-directed video by Pressa is also available to check out below. Look out for singles “Hood Trophy” & “Maserati” off the new PressaBrick project. 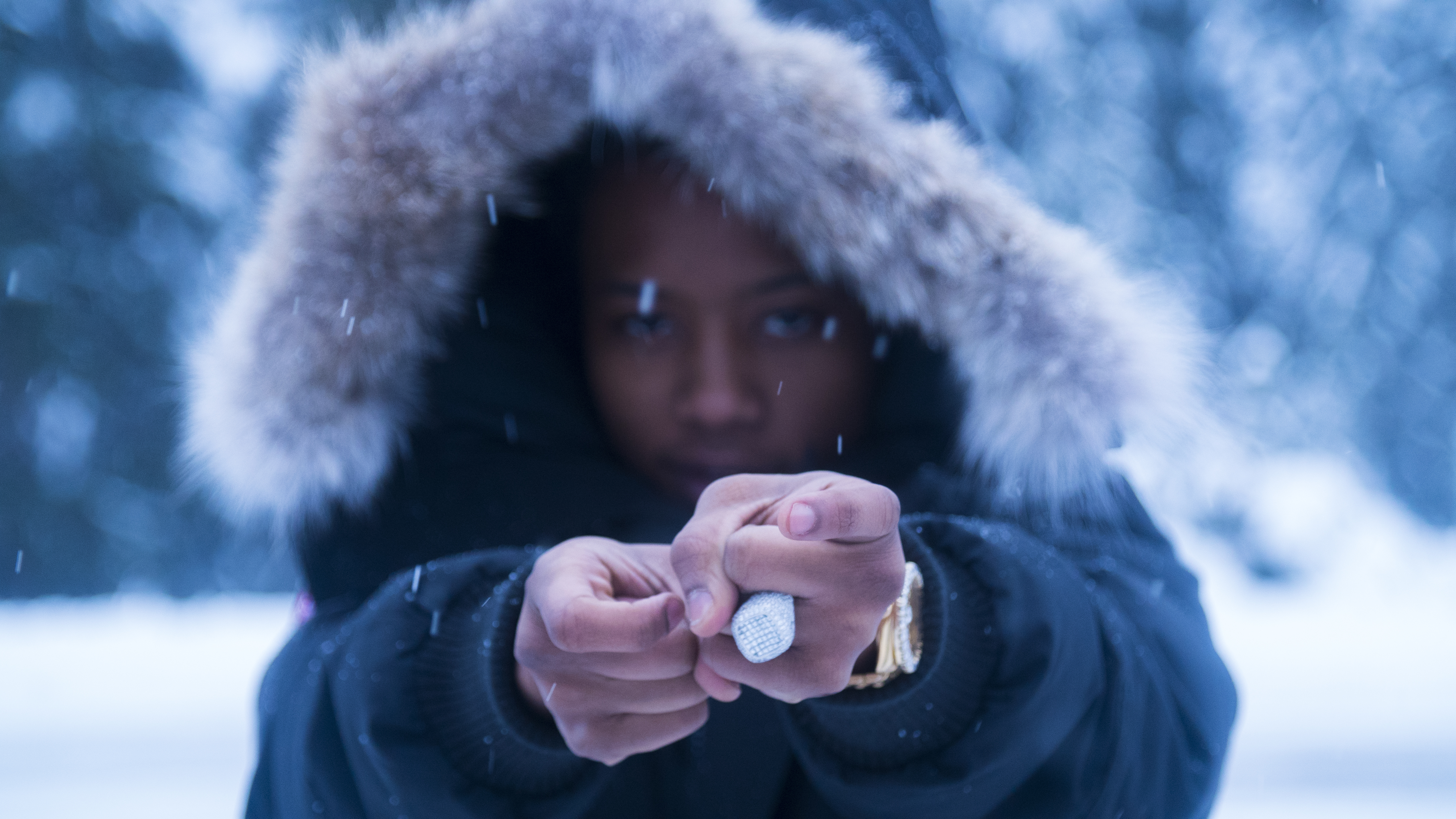 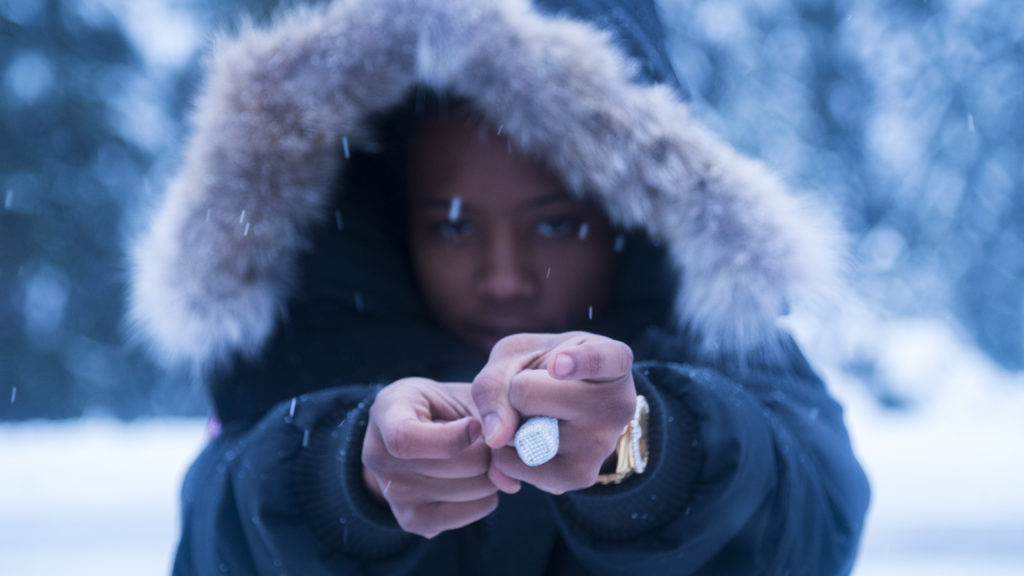 Toronto native Pressa has been busy on his Canadian Tour promoting his Press Machine project for most of the year, but now Pressa recruits Tory Lanez for the latest song called “Canada Goose.” Canada Goose has over 300,00 views in the first 2 days and was Produced by UK’s BricksDaMane and is off the upcoming Pressabrick project dropping sometime soon.
Spotify – https://open.spotify.com/album/3VWLlbopoEU6pG4j8V4eZu
Press Machine Mixtape on iTunes – https://itunes.apple.com/us/album/press-machine/id1219116843
Follow Pressa on Social Media:
http://www.instagram.com/pressa.armani
https://twitter.com/pressapressa
https://www.facebook.com/Pressa-123803674749856/
December 12, 2017 0 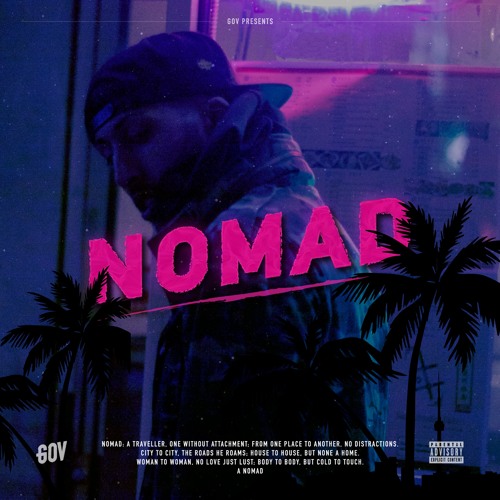 I’ve been working with an artist named Gov for the past couple years, he’s originally from London, UK but moved to Toronto in 2015 to pursue his music career.

He has an alternative / r&b sound that fuses several genres very well. He has a unique blend of R&B, Hip Hop and Electronic / Pop that makes for an interesting listen.

While currently working on his first official album for 2018, Gov has released “NOMAD” for fans in the mean time. The project was produced by Louis Vito and continues on the sounds he established with his previous EP release, “The Roses”.